Now that KamalaHarris has is going to be the vice-presidential elect. Lets know some facts…!

Now that KamalaHarris has is going to be the vice-presidential elect. Lets know some facts…! 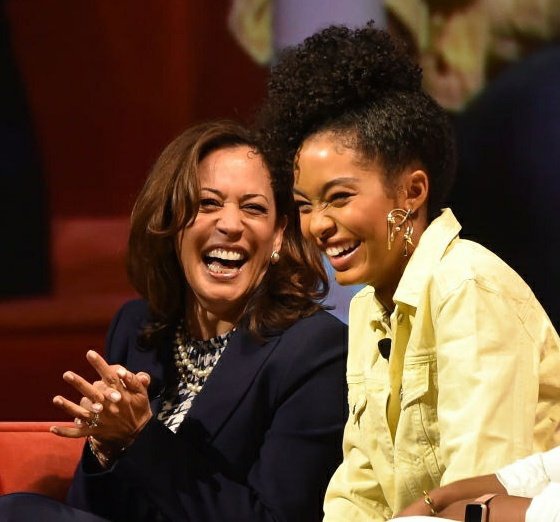 "Kamala Devi Harris was born to Donald Harris, her Jamaican-born father and Dr. Shyamala Gopalan, her Tamil Brahmin mother from India. Her father is a Marxist economist who taught at Stanford University."

Who is Willie Brown and what's the connection?"In 1994, she met Willie Brown, who at the time was the second-most-powerful man in California politics. As Speaker of the State Assembly, Brown was a legend in Sacramento and around the state."

"Brown was under investigation several times,by the State Bar of California, Fair Political Practices Commission,the FBI.In 1986 ...as California Assembly Speaker, he “received at least $124,000 in income & gifts...from special interests that had biz before the Legislature.”

Now this is neither here nor there for me, except for the political angle:"Brown was sixty at the time he began dating Kamala, who was twenty-nine. Brown was actually two years older than her father. Their affair was the talk of San Francisco in 1994."

"Kamala’s mother defends her daughter’s decision - and offered choice comments about Brown. "Why shouldn’t she have gone out with Willie Brown? He was a player. And what could Willie Brown expect from her in the future? He has not much life left."

"He (Willie Brown) put Kamala on the State Unemployment Insurance Appeals Board and later the California Medical Assistance Commission. The MAC paid $99k a year in 2002.. UIAB ~$114k.Both posts were part-time.At the time, she was working as a county employee making ~$100k".

"During his tenure, Brown came under FBI investigation twice for corruption involving lucrative contracts flowing from the city to his political friends."

"I thought it was only in Third World countries that people were forced to pay bribes to get services they’re entitled to from their government," said U.S. district judge Charles Legge about the rampant corruption under Brown. "But we find it right here in San Francisco."

"In January 2003, shortly after announcing her campaign, (Kamala) Harris had signed a form saying that she would stick to the city’s $211,000 voluntary spending cap for the campaign (for the San Francisco district attorney election)."

"Harris signed the pledge-and then blew right past the spending limit. By the end of Nov, she had raised $621,000...The San Francisco Ethics Commission vote to fine Harris was unanimous. Her campaign had to pay a $34,000 fine, a record in city elections."

Moving on to the next, and by far the most disturbing aspect:"Harris often recounts her background as a sex crimes prosecutor earlier in her career to attack others for their legal failings in this area."

"During her decade-and-a-half tenure as a chief prosecutor, Harris would fail to prosecute a single case of priest abuse and her office would strangely hide vital records on abuses that had occurred despite the protests of victims groups."

"Harris’s predecessor as San Francisco district attorney, Terence Hallinan, was aware of and had prosecuted numerous Catholic priests on sexual misconduct involving children. And he had been gathering case files for even more."

"Hallinan’s office had launched an investigation and quickly discovered that the San Francisco Archdiocese had extensive internal records concerning complaints going back some seventy-five years."

"In spring of 2002, Hallinan demanded the church turn them over to his office. A month later, the archdiocese reluctantly complied."

"The secret documents were explosive and reportedly contained the names of about forty current and former priests in the San Francisco area who had been identified in sexual abuse complaints."

"Hallinan used the information from the files to begin pursuing legal cases against them. In nearby San Mateo and Marin County, prosecutors obtained the same church records and those in Marin charged Father Gregory Ingels in 2003"

"But by June 2003, Hallinan and other prosecutors had hit a roadblock: the U.S. Supreme Court ruled that California’s law extending the statute of limitations for priest abuse cases was unconstitutional."

"The records that Hallinan had in his possession touched on well-connected institutions at the heart of California’s power structure. St. Ignatius College Preparatory School, in the Archdiocese of San Francisco, counted California governor Jerry Brown ... as alumni."

Now comes the Kamala connection:"According to San Francisco election financial disclosures, high-dollar donations to Harris’s campaign began to roll in from those connected to the Catholic Church institutional hierarchy."

"They’re full of shit," said Joey Piscitelli, the northwest regional director of Survivors Network of Those Abused by Priests (SNAP), the largest and most active victims’ group. "You can quote me on that. They’re not protecting the victims."

"With the outcry of victims groups, Harris’s office then attempted to shift blame, claiming that the idea of burying the evidence had been first suggested by her predecessor, Hallinan."

"But he [Hallinan] responded angrily to her claims. "I told Jack Hammel [the archdiocese’s legal counsel] in no uncertain terms that I wouldn’t go along with anything like that."

"James Jenkins..the founding chairman of the archdiocese’s Independent Review Board... resigned from the board... Jenkins argued that Harris’s deal with the archdiocese not only denied the rights of known victims, it also prevented other possible cases from coming forward."

"In April 2010, a journalist with the San Francisco Weekly asked for the records through California’s Public Records Act. Harris’s office denied the request, offering conflicting explanations as to why they could not provide them."

"In 2019, I requested those records through a California attorney. The San Francisco district attorney’s office responded that they no longer had them in their possession. Were they destroyed? Were they moved somewhere else? It remains a disturbing mystery."

"She somehow served as San Francisco district attorney from 2004 to 2011, and then as California attorney general from 2011 to 2017, and never brought a single documented case forward against an abusive priest."

"To put this lack of action in perspective, at least fifty other cities charged priests in sexual abuse cases during her tenure as San Francisco district attorney. San Francisco is conspicuous by its absence."

The next one:"At San Francisco’s adult entertainment clubs, dancers were taking customers behind closed doors and having sex for money. ... After repeated complaints ... the San Francisco Police Department decided to take action."

"The police action caught the attention of newly installed district attorney Kamala Harris, and her staff sent the message to hold off on the enforcement."

"Meanwhile, in response to continued complaints, the police conducted a pair of sting operations. Three undercover officers went into each of the two clubs and were quickly solicited by female employees for paid sex."

"At both the Market Street Theater & New Century Theater, it happened "within minutes."When the operations were done, 9 women were arrested, as was the GM of the New Century. The cops claimed that they were “slam-dunk cases."But Kamala Harris dropped the cases."

"Harris’s strange objections to prosecuting prostitution cases connected to these raids have a possible explanation. The owner of both the Market Street and New Century theaters was a company called Déjà Vu."

"An owner of Déjà Vu, Sam Conti, had a long history with Willie Brown. Conti had first hired Brown as his defense attorney back in 1977. They remained friends. At Conti’s 2009 funeral, Brown delivered a videotaped eulogy."

Next one:"Ricardo Ramirez. Ramirez ran a cement and concrete company called Pacific Cement. As of 2003, a full one-third of the public works projects in San Francisco used Pacific. ... Those contributions often went to the Willie Brown machine and were not always legal."

"illegally storing waste oil at one of his production facilities.Harris & her office refused to offer an explanation as to why they were going so light on Willie Brown’s friend & donor. "Harris' office had no explanation for why it dropped the concrete case,” - the Chronicle."

"Kamala Harris’s signature program as San Francisco district attorney was called Back on Track-a program designed to give first-time drug offenders an opportunity to avoid a criminal record."

"Those (in the program) included were not just nonviolent, first-time offenders who had committed a single drug offense. Some were illegal immigrants and violent criminals such as Alexander Izaguirre."

"Amanda Kiefer was walking down the street when Izaguirre snatched her purse and jumped into a waiting SUV. Rather than drive off, the SUV sped toward Kiefer to run her down. Kiefer jumped on the hood and saw Izaguirre and the driver laughing."

"The driver slammed on the brakes throwing Kiefer to the ground. The impact fractured her skull.Harris did not offer an explanation. Instead, she simply explained that enforcing federal immigration law was not her job."

Next one:"...in 2015 the attorneys general from fourteen other states, including New York, launched an effort to investigate nutrition companies on the grounds of false advertising and mislabeling."

"the Obama administration’s Department of Justice (DOJ) was also going after dietary supplement producers, charging them with exaggerated claims"

"The Federal Trade Commission (FTC) opened an investigation into Herbalife in March 2014.In July 2016, the FTC won a $200 million settlement against Herbalife.But Harris never even investigated the company."

"It is worth noting that those corporations in question all happened to be clients of her husband’s law firm, Venable LLP. GNC, Herbalife, AdvoCare International, Vitamin Shoppe, and others were represented by Venable."

"In 2015, prosecutors from Harris’s own attorney general’s office based out of San Diego sent her a long memorandum arguing that Herbalife needed to be investigated. ... Harris declined to investigate or provide the resources-and never offered a reason."

10+ behaviors to become a confident person